Loyalty Oaths from the Military

I'm opposed. I agree with Ace, this smacks of a fraudulently elected, Banana Republic president's concern about the possibility of his country's military having a Higher Loyalty to the Constitution.

...that has NEVER been the way we do things in this country. When you join any branch of our armed forces, you don't sign a loyalty oath to the president or any elected-official, you sign an oath to defend the Constitution of the United States of America, period. That should be sufficient. The fact that it is apparently not sufficient enough for the incoming Biden administration speaks volumes. 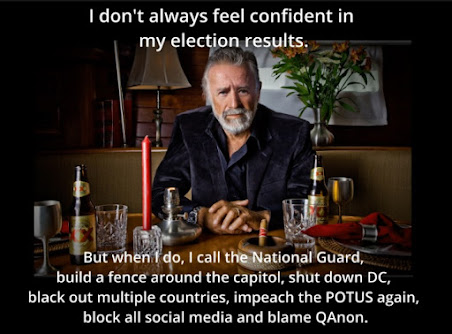 I'm old enough to have seen some cheats, grifters, cons, politicians, and other assorted crooked knaves. This is just the sort of behavior that would have my Mom Antenna swivelling madly, sure that my Dearly Loved Offspring are lying their asses off, again.
There's a reason for the old answer to a question:

How do you know that a teenager is lying?

Now, please remember: someone who votes Left is not necessarily a Leftist. Sometimes, they're just another sheep following the flock.

Women - and Women-ish Men, are particularly prone to this. They assume that what their flock's leaders are saying is, at a minimum, BASED on truth. In that, they are wrong.

But, they aren't lying, merely repeating a lie, that they believe to be the truth. They TRUST the people telling them those lies. They seem so relatable, so polished, so respectful of their culture.

How the hell do you uproot that nest of misinformation, and restore them to normal thinking capacity?

If I had that answer, I wouldn't be surrounded by my loving family, just about all buying into the Leftist Line.

They are - at heart - good people - generous, hard-working, living in a Godly manner (no matter what their religious beliefs). They wouldn't commit a crime for any reason. They focus on their family and neighbors. They obey the traffic and other laws (I'm not as good about obeying the speed limit - I regularly exceed it).

They pay their taxes (although, they DO take advantage of any allowable deductions to minimize them).

They vote - unfortunately, for Dems. But, they only vote ONCE, so there is that.

But, no matter what I posted on social media, no matter what I said, or how careful I was to focus on logical reasoning, they had closed their minds to the possibility of any deviation from the Officially Accepted Truth, According to the Left.

The BEST I could squeeze out of them is that they thought the riots that took over cities and burned the businesses of small entrepreneurs were bad, and should stop. In that, they are much like the rest of the country.

I'm thinking that we who want/need to affect the thinking/emotions of those in thrall to the Left, need to change tactics. We need to begin looking for ways to treat this like an egg stuck in the pan - first, remove the heat. Then, chisel around the edges, very gently. Move around the pan, easing up under the egg, careful not to go too fast, lest you break the yolk. Back and forth, moving when you encounter serious resistance, and tackling the job from another position.

Eventually, the egg will be able to be lifted, without breaking. Of course, by that time, it may be stone cold and inedible.