. . . I hope, with all my heart, they [Americans] wake up to the psychopathic, sadistic, predator class that truly rules them before it is too late for all of us . . . .[1] 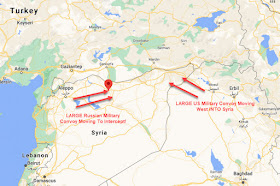 It only took Joe Biden 24 Hours to begin screwing up world affairs. The United States military is moving a MAJOR military convoy INTO eastern Syria. Russia is now moving their own MAJOR Convoy to intercept the US Convoy.[2]

Russian military moves in response to said U.S. movements would be a major response. CIA-Simulation Warlord has a video of Russian military vehicles backed up on a road where a very large number of semis are also lined up. Whole lotta shakin' goin' on. The video shows only the tail end of whatever the Russians had on the road and that consists of eight heavy trucks, an ambulance, and an armored personnel carrier. That was yesterday and supposedly the convoy was heading east toward Al Hasakah in the northeast. We shall see.

However, I'm sure the part about U.S. movements is accurate.

Vanessa Beeley notes below the recent uptick in terrorist activity, which means ISIS activity I presume, but then that's just a semi-educated guess. Given evidence of prior U.S. solicitousness toward ISIS, I don't doubt "our" secret cooperation with them lives on. John McCain's chin wag with the "opposition" filth in Syria a while back didn't exactly take place in a vacuum. The "rat line" from Benghazi to Syria was not what you'd call a rogue operation and then there's the enormous support for the White Helmets that the United States and the United Kingdom provide. Because . . . why?

So this uptick in opposition activity has nothing to do with the new U.S. move? Sure.

I have been talking about the Biden administration for some time now in relation to Syria and I have predicted that the aggression against Syria will now be escalated. Since the New Year we have seen an increase in US-backed, trained and equipped terrorist attacks on Syrian Arab Army and civilian convoys including fuel convoys. This is a deliberate strategy to push the Syrian people further into food insecurity and depravation (sic) with the coldest winter months now here.[3]

With luck the U.S. will exercise its previous restraint when confronted by Russian forces, if it comes to that. Perhaps this supposed Russian response will be enough of a message to keep oligarchic forces from making fresh moves.